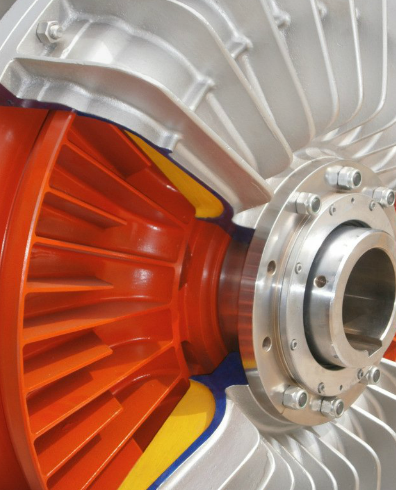 The Hydrodynamic Coupling is a device of transmission of primary importance and has a large field of application.
It is simultaneously a gradual starter and a stress eliminator and it is able to create in every moment and automatically an equilibrium between the motor and the transmission of the operating machine; therefore it eliminates every dangerous and unexpected overload and protects the motor and the transmissions as well.

The Turbostart Hydrodynamic Coupling consists of two impellers with symmetric vanes, a primary (pump) and a secondary turbine).The primary impeller driven by a motor sends a continuous flow of oil against the second impeller, transmitting therefore power to the other device.
Since the two impellers are opposite and have symmetric vanes, the result is that the Hydrodynamic Coupling has a perfect reversible function; also it is able to work horizontally, vertically or inclined (for sizes 18 – 19 – 110 P it’s important to specify).
The output speed of the standard Hydrodynamic Coupling is always lower than the input speed; the difference between the two speeds is commonly called ” slip” and it is measured in persentage (%).
Under a constant torque the slip is maintained constant but if the output load increases, the secondary impeller (turbine) will slow down.
As a consequence there is an increase of liquid velocity into the fluid coupling and resulting in an increase of kinetic energy.
This increase of energy, pressing on the secondary impeller (turbine), balances the increased output load.
lf this new output load is maintained constant and the motor is capable of suppling the equivalent power, a new equilibrium is established, characterised by a greater constant slip. On the contrary, at a decreasing output load, everything described above is inverted and the slip diminishes.
According to the slip we can determine the efficiency of the coupling and the value of power that is trasformed into heat.
An accurate selection based on the effective power absorbed by the driven equipment determines the selection of the Hydrodynamic Coupling able to dissipate by natural ventilation the heat produced.
The Hydrodynamic Coupling with standard seals can normally withstand a maximum temperature of approximately 100° C and, with special seals, approximately 200° C.
ADVANTAGES

The Hydrodynamic Coupling, inserted into a transmission for starting up a high inertia machine controller by an asynchronous
electric motor with Direct on Line Starting has the following advantages:
– Eliminates the rigidity of the mechanical transmissions and guarantees the flexibility of the Hydraulic transmission
withstanding all the shocks, torsional vibrations and unexpected overloads, and protects the motor and driving machine.
– Reduces peak current during start-up. The electric motor rapidly reaches the operating speeds with low peak current.
– Permits smaller motor sizes according to the power demand of the driven machine.
– Permits a high stop start duty cycle even under load, sudden changes of direction and plug (reverse) braking.
– Distributes the load in installations where two or more motors are installed. The Hydrodynamic Coupling allows every motor
to reach its own operating speed, automatically distributing load demand.
EXAMINATION OF THE BEHAVIOUR OF THE ELECTRIC MOTOR
AND THE HYDRODYNAMC COUPLING DURING THE START-UP
To fully realize the above mentioned advantages, it is necessary to select the correct hydrodynamic coupling. Let us consider the
behaviour of both the motor and hydrodynamic coupling when the two items are working together, from the moment of the start to
full speed.
Examining the diagram Torque (C) vs Speed (v)
Fig. 1 on which the curves:
M – torque curve of a direct start (DOL) asynchronous electric motor.
| – Current vs Speed (v).
Following the curve M during starting (when v= 0) we notice that the available torque Ca is approximately 1.5 times the rated torque
Cn on DOL starting, and approximately 0.6 times Cn on Star Delta Starting (C st ).
Normally the motor operates at speed n1 where the rated torque Cn is equal to the working torque.
It should be noted that the motor produces maximum torque CM of 2.5 times the rated toque Cn at the speed nM ( 90% of rated
speed).
DOWNLOAD CATALOGUE IN PDF

This website uses cookies to improve your experience while you navigate through the website. Out of these, the cookies that are categorized as necessary are stored on your browser as they are essential for the working of basic functionalities of the website. We also use third-party cookies that help us analyze and understand how you use this website. These cookies will be stored in your browser only with your consent. You also have the option to opt-out of these cookies. But opting out of some of these cookies may affect your browsing experience.
ACCETTA E SALVA
Go to Top